I haven’t been paying attention to the news much lately and as you know I’ve been out of town for a few days, and today we went to Moody Gardens so I haven’t had time to post about any of that, but- someone, can’t remember who,  told me something about Piglet and Winnie the Pooh being named dastardly characters and being banned in Iran or Iraq or somewhere. WELL-

One of my favorite authors is Larry McMurtry, particularly his novel, Lonesome Dove, and in that novel, one of the main characters, Gus, has a couple of pigs that are his pets. Also in one of his novels, The Evening Star, which is a sequel to Terms of Endearment, that main character, Aurora, has a grandson in prison in Huntsville, and every time she goes to see him she gets really upset and nothing can make her feel better until she stops at The Pig Stand down on Washington St. in Houston and eats a couple of Pig Sandwiches. I have always wanted to go to The Pig Stand just because of that part of the book, but I’ve never gotten around to it, and I’m not even sure if The Pig Stand in Houston is still in operation, though it’s still listed on the front of the menus.

On our way to San Antonio though, we stopped to eat outside of Seguin and to my surprise we found a Pig Stand. I didn’t eat a Pig Sandwich though, I ate a breakfast taco with sausage, cheese, and eggs, so it still had pig in it… While we were there I took a couple of pictures- This one is self-explanatory- This one is my daughter Stephanie and the dastardly animal. Steph and the Pig

And this is a very scaled-down picture of their menu that I scanned. 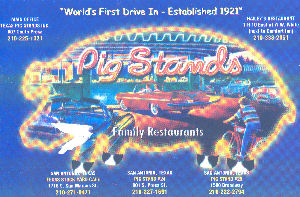 Pig Stand menu
We like pigs in Texas thanks.