Facebook Has No Shame When It Comes To Advertising Dollars

Facebook has retained FactCheck.org to aid in their fight against fake news stories in your timeline, which goes hand in hand with what they claim is their strict stance on “clickbait” posts. I personally have never been bothered by the so-called “clickbait” because the few that I did click on delivered nothing more than I’d expected. To not understand that those types of posts are intentionally worded to entice a reader to click on the link and find out more, is incomprehensible to me.  How can people be so damned stupid as to not understand that it’s a come on?   And not ALL of those types of posts are a wasted click, and if they were, so what?  You should have enough sense to know if you want to click a link or not and if you don’t, you shouldn’t be on Facebook or any other site that may rely on its user’s intelligence to keep the site viable for further growth.
. 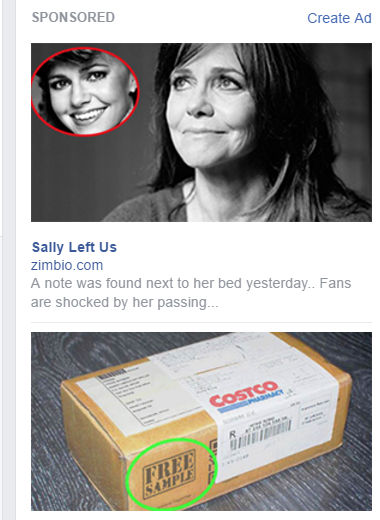 Some of the stories offered were interesting or cute or funny, but the one thing they all had in common was that they took your attention off of Facebook for a few moments and also away from THEIR advertising modules, and here we arrive at the reason for this post.
Thousands of Fan Pages were removed from Facebook with no reason being given to owners, they were just removed, and for the most part, when page appeals were made, they were also denied.  The one thing that most of the pages removed had in common was that they posted “clickbait” links.
Now I’m sure some of you are more than happy not to see those posts in your newsfeeds any longer,  but if you were, you would still know it was a matter of personal choice whether you should click the link button and find out just what was going  on at the other end.
I found the following just about 15 minutes ago on the sidebar of a group I admin in, and with the recent deaths of Debbie Reynolds and her daughter Carrie Fisher, I thought, oh no, not her as well when I saw it was Sally Fields they were claiming to have “passed” in a sponsored Facebook ad that didn’t even lead to the domain listed on the ad;  but was redirected to another where it was clear that Sally Fields hadn’t “passed,”was just fine,  and even better, as she and the hosts and everyone else involved with selling some very expensive miracle wrinkle cream, would all be getting a cut of the pie I’d been misled to come taste.  I’d rather have seen the fire hot ball bearing hit floral foam. That would have at least given me a few moments of entertainment rather than pissing me off when I see Facebook doing everything down to the T that they have removed Fan Pages for and tried to act holier than thou about. 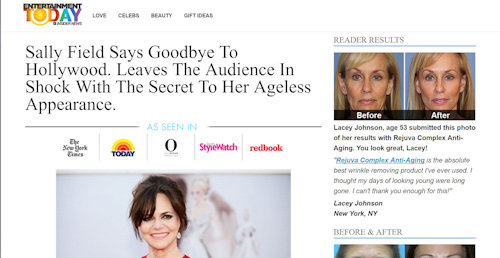 Ads are reviewed before they are allowed to run and if they are inappropriate or deemed to be outside of the realm of genuine business concerns are not allowed to be published.  SUPPOSEDLY.  There is absolutely no way in hell you can convince me that a reviewer saw that ad for publication, bot or not, and if the latter couldn’t pick up on the keywords to determine exactly what type of an ad it was, surely a human should have.   I would have realized it was bullshit myself if I hadn’t been operating on maybe 4 hours of sleep and the fact that it just seemed logical, the rate celebrities have been dying off this year.  I would have realized too that the image below that of Sally was a product, and was part of the ad, but it’s done pretty cleverly, (another thing FB wouldn’t have missed) but obviously allows, due to the profit from advertising.
I think you’re a money grubbing hypocrite Mark Zuckerberg and your vision of a new world bringing people together seems more like a plan to keep the sheep in line and paying for your ego, or perhaps some more psychological tests you can apply to unsuspecting members without their permission. You’re just a college kid that got lucky and an ass to boot. Quit acting like a saviour when it’s clear you’ve set up in the temple.
RANT OVER!